Despite uneasy macroeconomic conditions, the year 2001 was a time of consolidating BRE Bank’s market position in its four main business lines: corporate banking, retail banking, investment banking, and asset management and private banking. 2001 was yet another year of BRE Bank’s above-average financial performance in the Polish banking sector.

In Q1-3 2001, BRE Bank ranked number two among all listed banks in Poland in terms of net profit (PLN 236.8 million) and main performance ratios (ROE at 16.4%). The Bank’s Q1-4 2001 profit was also strong at PLN 336.18 million, in the mid-range of the adjusted 2001 profit projection published in November 2001. According to estimates, BRE Bank came second in terms of net profit and ROE (16.5% p.a.) among all banks listed on the Warsaw Stock Exchange.The Bank’s balance sheet total was PLN 23 billion in 2001, up 41.1% during the year. The Bank’s loan portfolio grew 45%, compared to the average growth of 7% in the banking sector.In 2001, BRE Bank consolidated its position in corporate banking. Despite difficult macroeconomic conditions, which largely determined the demand of corporate clients for banking service in 2001, BRE Bank was a reliable partner offering extensive experience and a broad product range coupled with flexibility tailored to changing market conditions and clients’ needs, and thus providing a fast growth corporate environment. Corporate clients of BRE Bank were offered a wide range of loans, capital market products, financial advisory, foreign trade finance, derivatives, and interest rate risk and fx risk hedging instruments.In order to enhance and modernise client service, BRE Bank restructured its sales force. The business of the corporate banking line had a stabilising effect on the Bank’s financial performance in 2001.BRE Bank expanded its operation on the retail banking market in 2001. mBank, the first fully virtual bank in Poland launched in November 2000, achieved much more than the ambitious targets of 100-150 thousand accounts and PLN 1 billion in deposits by the end of 2001. As at the year-end of 2001, mBank clients had opened over 188 thousand accounts and deposited over PLN 1.037 billion. mBank became the unquestionable leader in internet-based retail banking in Poland. Its client base keeps growing (210 thousand accounts active as at 13 February 2002, deposits at nearly PLN 1.170 billion)BRE Bank expects equally good performance of MultiBank, another retail banking project launched in the autumn of 2001, which combines modern internet-based banking with traditional branch service. MultiBank has opened 8 Financial Service Centres and plans to have a network of 30 branches by the end of 2002.In the past year, BRE Bank consolidated its strong position as an investor. One of the major transactions of 2001 was the sale of shares in Optimus SA to the media holding ITI. Despite a bearish market and difficult conditions in the Polish mass media sector, the disposal of Optimus SA shares provided BRE Bank with gains at a ca. 50% return rate. The unprecedented split of a listed company by spinning off part of its business was a very successful operation: the shares of the two new split companies, Grupa Onet.pl and Optimus Technologie (currently Optimus), were worth ca. 20% more than the last listing of Optimus SA before the split.In 2001 BRE Bank acquired a majority stake in the listed Bank Częstochowa to step up the growth of the BRE Bank Group retail banking line.In Q4 2001, BRE Bank invested in Stomil Olsztyn SA (the shares were sold in February 2002 at a high profit) and Elektrim SA (the Bank now holds over 10% of Elektrim shares and is its largest shareholder).In 2001, BRE Bank was also active on the money and capital markets. The Bank’s income from this business witnessed a fast growth in 2001 (ca. 50% share in profit from banking operations). This was possible with BRE Bank’s strong position on the money and derivative markets, the latter growing fast in 2001. BRE Bank issued warrants on stock exchange indexes and on stocks of selected companies. The Bank was also active on the derivative market. For the second successive year, BRE Bank took the first position in an NBP Dealer Activity Index ranking of banks applying for 2001 Money Market Dealer Agreements with NBP.Financial Outlook for 2002BRE Bank’s financial plan for 2002 (under the Polish Accounting Standards) projects a net profit of PLN 408 million (up 21.4%) at BRE Bank and PLN 371 million at the BRE Bank Group.

The table below features detailed financial targets for 2002: 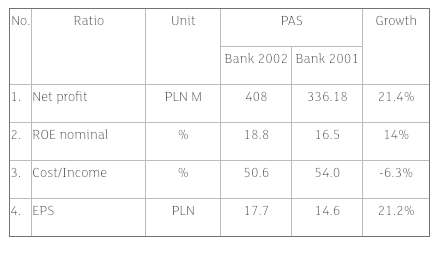 The 2002 projection takes account of the following material assumptions:

- A EUR 200 million subordinated loan added to the equity to be received in Q1 2002.
- An April 2002 General Meeting of Shareholders of BRE Bank to approve the planned restructuring of the equity resulting in a one-off dividend payment of PLN 10 per one share and to approve the amendment of the Bank’s By-laws whereby 10% of the share capital will be cancelled.
- The terms and conditions of the cancellation will be defined in a relevant resolution of the Bank’s Management Board. Until the completion of this legislative process, the amount of shares bought back will reduce the equity figure used in the calculation of the solvency ratio.The balance sheet structure will continue to improve with growing loans to non-financial clients and a fast growing share of deposits from non-financial clients, mainly acquired by the Bank’s retail banking line.Approximately 1/3 of the operating profit (after provisions) will be generated through capital gains (disposal of ITI Holdings shares, minority stakes in PTE Skarbiec-Emerytura and mBank, other).
- The divestment can be realised in part, depending on market conditions.The Bank will keep the leader’s position on the derivatives market.
- The Bank will continue to exercise a strict regime of payroll and fixed asset costs while ensuring further growth of the retail banking network.
- No new acquisitions are planned except PTE EGO.

The projection is subject to change in the event of circumstances causing a change in the published projection factors by at least 10%.In January 2002, the rating agency Moody’s raised the rating of bonds issued by BRE Bank (under a Eurobond Issue Programme) from Baa1 to A3. The new rating is better than Moody’s rating of Poland.BRE Bank’s strong market position in 2001 was recognised and awarded by opinion-makers. The awards received in 2001 include the most prestigious token of recognition in the sector – the Award for the Economy presented by the President of the Republic of Poland, known as the Oscar of the Economy or the Noble Prize of the Economy. BRE Bank was awarded as a Financial Institution. The prize is a sign of particular acknowledgement as it is the best Polish companies, recognised on world markets, that compete for the award. BRE Bank was the first Polish bank to receive the award in the 4 years of its existence.BRE Bank also received another prestigious title of the 2001 Leader in Human Resources Management in a ranking of the Institute for Labour and Social Affairs. In 2001, BRE Bank was also appreciated on foreign markets. The magazine Euromoney awarded BRE Bank for the sixth time in its prestigious ranking Euromoney Awards for Excellence. In 2001, Euromoney also awarded BRE Bank as the Best Equity House in Poland.BRE Bank’s major goals for 2002 and next years include fast acquisition of new clients. This is a crucial objective as sustainable growth, measured mainly with the growing customer base, will be of key importance to Polish companies (including banks) on the eve of Poland’s EU accession when they are faced with the ambitious challenge of approximating their product and service offer to the high standards of Western competitors. Among the measures to achieve this goal, the Bank plans to be very active in its four main business lines (corporate banking, investment banking, retail banking, asset management and private banking) so to provide a comprehensive offer of broadly understood financial services.BRE Bank will strive to attain these ambitious targets in 2002 by leveraging high technologies. The Bank will continue its e-BRE Programme aimed at the implementation of internet culture across the Bank and the Group. Later this year, the Bank plans to implement a state-of-the-art IT system supporting the Bank’s business operations.Kontakt dla mediów