After Q1 2002 BRE Bank generated net profits of PLN 26 250 million with ROE at 13.27%.With respect to equity capital, after three months of 2002, BRE Bank ranked fourth among WSE listed banks.

Selected financial performance indicators after Q1 2001 and 2002 (Polish Accounting Standards) are reported in the table below: 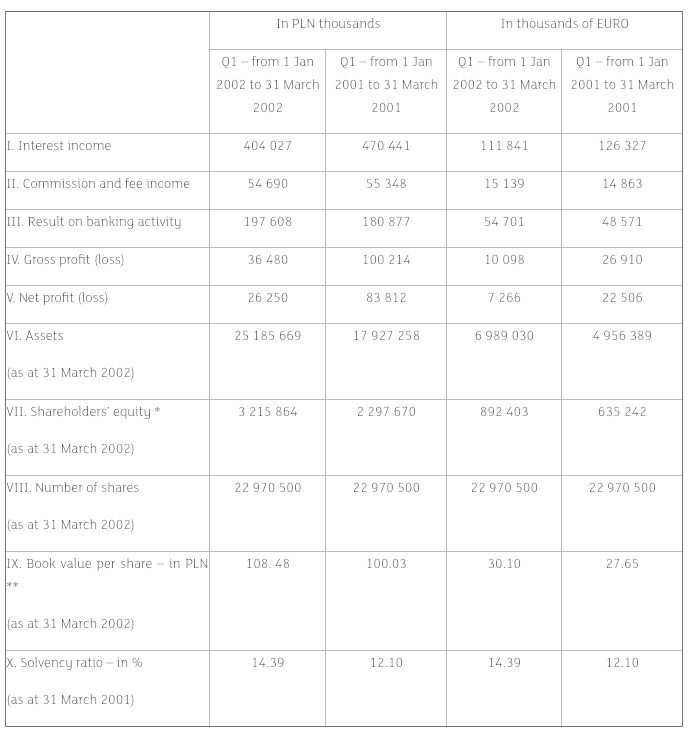 In case of BRE Bank a significant discrepancy between financial results for Q1 as reported under IAS and PAS respectively stems from the fact that each of the Accounting Standards concerned applies different approaches to securities valuation. Under PAS since 1 January 2002 results of valuation of securities classified as “available for sale” are recognised in the income statement section of the financial reports. In contrast, when IAS approach is taken such securities would be recognised under the heading “ revaluation reserve” and hence would not be recognised in the profit and loss account.Amongst most noteworthy developments seen in Q1 results of the Bank is an impressive growth in asset total from PLN 17.9 billion (at the end of Q1, 2001) to over PLN 25.1 billion, which translates into growth rate of 40% for the year. Equally important is the above average growth seen in the result on banking activity, approximately 10% growth against Q1 figures. When consolidated results are examined this growth rate is even more impressive as it stands at 39%.On top of that, following changes to accounting policies that were implemented at the beginning of 2002 the “opening balance” for 2002 was restated. Following that restatement the so-called “undistributed result” (profit) in the amount of PLN 32.929 million was generated and will be subject to distribution together with profits for 2002.Valuation of shares and holdings in subsidiaries carried out in accordance with the equity method will be completed shortly and its results will be included in the financial report for the first six months of 2002.The results generated by the Bank for Q1 2002 were earned in a difficult macroeconomic environment which significantly affected the operations of most Polish businesses, including also those of listed companies. The financial result of the Bank was also heavily depressed by numerous investments including expenditure on the development of the Bank’s Retail Division, this involved further roll-out of MultiBank outlets and expansion of product offerings and scope of operations in mBank and MultiBank.The financial result generated by BRE Bank after Q1 2002 was not affected by the settlement of the conciliation agreement concluded on 25 April 2002 between BRE Bank S.A. and the State Treasury whereby the latter reimbursed the Bank with refurbishment costs related to upgrade of the premises located in Szucha street. Under the said conciliation agreement BRE Bank waived its right to statutory interest accruing to its benefit between 1 January 2002 and the payment date and the State Treasury repaid its dues to BRE Bank S.A. in the amount of PLN 25 013 145 and agreed to cover lawsuit costs.Yet despite a tough market environment and high spending on investments the financial result of BRE Bank after Q1 does not call for any adjustments to the Bank’s annual budget at this stage given the budgeted composition of annual income to be generated by BRE Bank S.A. (it is assumed that the Bank will generate a net profit of PLN 408 million and the BRE Bank Group will achieve profit of PLN 371 million). In line with the assumptions underlying the budget a major share of operating profits (following establishment of provisions) should be contributed by capital gains realised, including:Sale of shares in ITI Holdings, the company that is about to be floated on the Warsaw Stock ExchangeSale of minority holdings in PTE Skarbiec-Emerytura (with the company now involved in strong efforts to finalise a merger with a Universal Pension Fund operated by BIG BG)Minority holdings in mBank, whose shares (following transfer of operations to Bank Częstochowa) will be listed on the WSEAlthough as originally announced those investments may be realised only in part, market conditions permitting, current status of their realisation is on track and provides a sound basis to believe that those transactions will be completed timely.BRE Bank also attaches a lot of hopes to an above average rate of return from its investments in Elektrim shares and to its plans to buy from that company – together with Eastbridge N.V. – 49% shares in Elektrim Telekomunikacja. Those plans are increasingly realistic, especially in the context of the agreement signed 12 May 2002 whereby the consortium of BRE Bank and Eastbridge N.V. was granted an exclusive right to negotiate the acquisition from Electrim of a 49% equity stake in Elektrim Telekomunikacja Sp. z o.o.and a 49% stake in Carcom Warszawa Sp. z o.o. and one share in Polska Telefonia Cyfrowa Sp. z o.o.The likelihood of a successful completion of the deal has recently been improved by the fact that Elektrim S.A. signed a preliminary agreement with bondholders representing approx. 50% of total nominal debt principal issued by Elektrim. The event offers the opportunity to stabilise the situation of Elektrim S.A. and in addition it will have a positive impact on further developments in the arbitration proceedings that are currently afoot in a Court in Vienna (and relating to a claim made by Deutsche Telekom) and at present the Bank is satisfied with the lawsuit results to date.