The difficult macro- and microeconomic situation in the Polish economy and recent trends on the capital markets affected the results of the banking sector last year and had a clearly adverse effect on the profitability of BRE Bank in H1 2002.The following factors also influenced the Bank’s results:amended rules of the valuation of strategic companies in the Bank’s portfolio. As of 1 January 2002, under the Polish Accounting Standards, the Bank is required to record equity investment in subsidiaries according to equity accounting valuation, which significantly affects the company’s Profit and Loss Account.As a result, the Bank performed a new valuation of subsidiaries as at 1 January 2002, which forced the Bank to report one-off revaluation in its Q2 2002 report. Moreover, it is important to note that many BRE Bank Group companies are now at the stage of growth, which requires investment for further expansion. This is particularly important in the context of Poland’s forthcoming EU accession. Importantly, the sovereign market value of Group companies is several times higher than their value in the Bank’s books.In addition, as of June 2002, the Bank’s individual and consolidated results have converged, which ensures full transparency of performance results presented to the shareholders and investors.amended method of the valuation of stocks, shares, and securities for trading; andnecessary provisions. Growth in the share of irregular receivables (at the end of June 2002, irregular receivables were 15.2% of the portfolio and lost debt was 4.6%, compared to 13.1% and 3.5%, respectively, at the end of March 2002) required additional provisioning. The largest portion of provisions relates to the Szczecin Shipyard; provisions were also set up for irregular consumer loans. In addition, over PLN 16 million was allocated to the general risk reserve.Selected Financial Performance Indicators, Q2 2002: 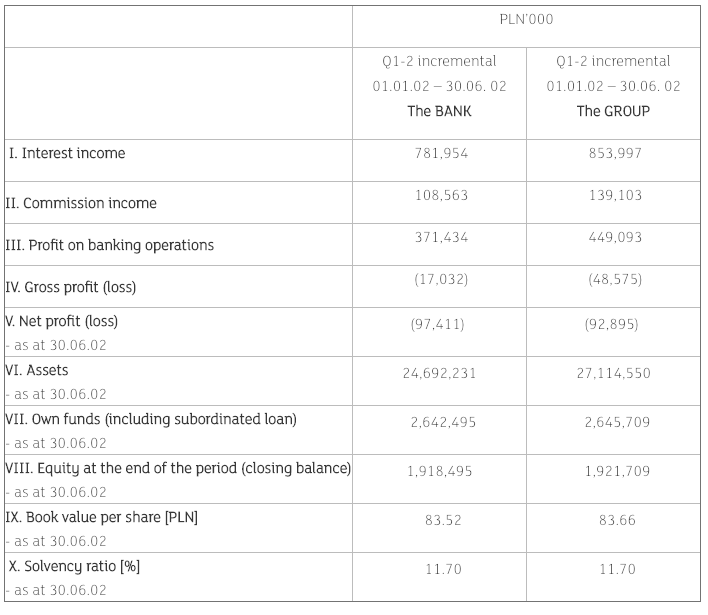 Among many remedies undertaken to counteract the difficult macroeconomic situation reflected in the Bank’s results, the Bank’s Management Board have decided to implement a large-scale programme of cost-cutting measures in day-to-day activities ensuring sustainable growth in income in the four core businesses of the Bank. The measures taken will ensure the Bank’s adequate income in 2003-2004.
As part of the programme, the Bank will carry out group staff redundancies and amend the rules of staff remuneration.In addition, in response to the continued unfavourable stock market conditions and long-term bearish trends on the Warsaw Stock Exchange, BRE Bank has recently reduced its exposure on the stock market and is making efforts to close previously made investments. However, the main criterion applied by BRE Bank in closing its positions is to optimise the rate of return. Consequently, the Bank does not make hasty decisions to boost its ad hoc profits and is ready to postpone the finalisation of some transactions where a delay gives real chances of higher profits at a later time.As a result of this policy, the disposal of some packages of stocks in the Bank’s portfolio seems economically unjustified this year. The Management Board of BRE Bank have thus decided, among others, to postpone the sale of mBank for at least a year in order to take advantage of the value of the still dynamically growing number of clients, the expected change in the valuation of assets in the period directly preceding Poland’s EU accession, and a lower income tax rate. Work is underway to sell some stocks in PTE Skarbiec-Emerytura and/or to achieve further consolidation on the market.Given the above mentioned decisions, the Bank’s Management Board believe that the previously published 2002 profit projection of PLN 371 million (BRE Bank Group) is not feasible.Although the 2002 profit projection cannot be upheld, BRE Bank’s core safety ratios are steady and strong. The Bank’s liquidity remains at a safe level under international standards. The Bank carries out daily monitoring of both the market risk of the trading portfolio and the Bank’s ledger, the liquidity risk, and the credit risk. BRE Bank’s solvency ratio (which reflects the capital adequacy of a financial institution), calculated on a daily basis, is over 11%, much above the level set in the Banking Law (8%). At the end of Q2, the solvency ratio of BRE Bank was 11.70%.In the current circumstances, it is very promising that despite temporarily weak financial results of the Bank, BRE has retained its strong market position and remains a leader in many market segments. BRE Bank has recently been very successful, among others, on the money and capital markets. In the National Bank of Poland ranking of banks active on the money market, the fx market, and the debt market, BRE Bank has taken the first position among all banks running for the status of money market dealer with NBP. In the Fitch Polska ranking of debt issue arrangers, BRE Bank comes second in terms of the value of issued mid-term notes and third in terms of the value of issues short-term notes (as at 31 July 2002).mBank, an internet retail banking venture, has also been very successful. As of 5 August 2002, mBank had over 254 thousand clients who deposited approximately PLN 1.6 billion in over 314 thousand accounts. mBank’s product offer continues to enjoy clients’ strong interest: the growth rate of mBank deposits was 6.78% in June 2002, compared to a negative average rate of the Polish banking sector at -0.04% (source: Council for Electronic Banking, Polish Banks’ Association). Today, one in four electronic banking clients is an mBank customer.Despite the very difficult conditions of corporate banking business, the Bank’s operations in this area did expand. The Bank’s loan portfolio grew 10% and the value of deposits increased 5% compared to December 2001.Given the Bank’s results in Q1-2 2002, the Management Board of the Bank strongly believe that the year will close at a profit as the Management continue to take measures aimed at preventing losses. The amount of the profit will mainly depend on improvements in the overall economy as well as in stock prices of companies in the Bank’s portfolio.In addition, considering the Bank’s profitability cycle over the past years, BRE Bank plans to take advantage of the weaker results in 2002 and, like in 1998, to implement internal reforms in order to stimulate further growth. One of the Bank’s priorities in the mid-term is to ensure satisfied profits in 2003, 2004, and in the future.