Notably, BRE Bank’s 2002 earnings are severely encumbered in result of legislative amendments imposing the necessity to apply Polish Accounting Standards in the valuation of strategic companies in the Bank’s portfolio. The new accounting method, under which BRE Bank must record capital investments in subsidiary undertakings according to the equity method, results in a significant burden on the profit & loss account. In addition, a fact that is not immaterial for BRE, a bank consolidating earnings of as many as 17 companies, most of these are still in the growth stage that requires subsequent capex effort.A counterweight to the above legal regulations, albeit on a much smaller scale, comes in the form of guidelines followed by the Bank pursuant to the Finance Minister’s Regulation of last Sept. 20th, which allows for classifying the valuation of what is known as “available-for-sale securities” under ‘Equity’, a fact of positive impact for after-tax earnings following Q3’2002.Moreover, given deterioration in the financial situations of Poland’s corporate sector, the Bank’s earnings this year are also impacted by the necessity to allocate reserves.Despite difficulties in the macroeconomic environment, to BRE Bank’s satisfaction, it has been successful in continuing to maintain high growth rate in its loan portfolio (of 4.1% in Q3), with a parallel drop in the portfolio’s share of substandard loans down to 14.7% (against 15.2% in Q2’2002). This has been enabled by effective credit risk control and is important especially in view of the fact that, in the Polish banking sector, this share is still on the rise, currently hovering around 20%. What is equally important, in Q3 the Bank has maintained all prudential indicators at high levels: liquidity continues at a safe level, with capital adequacy up to 12.6%. Also, the Bank has been pursuing efforts to incorporate new requirements formulated by the Basle Committee for capital adequacy.Against Q2, BRE Bank has significantly restricted the size of newly allocated reserves (i.e. by ca. 55%)  which total PLN 81m in Q3 (as set against PLN 179m in Q2). 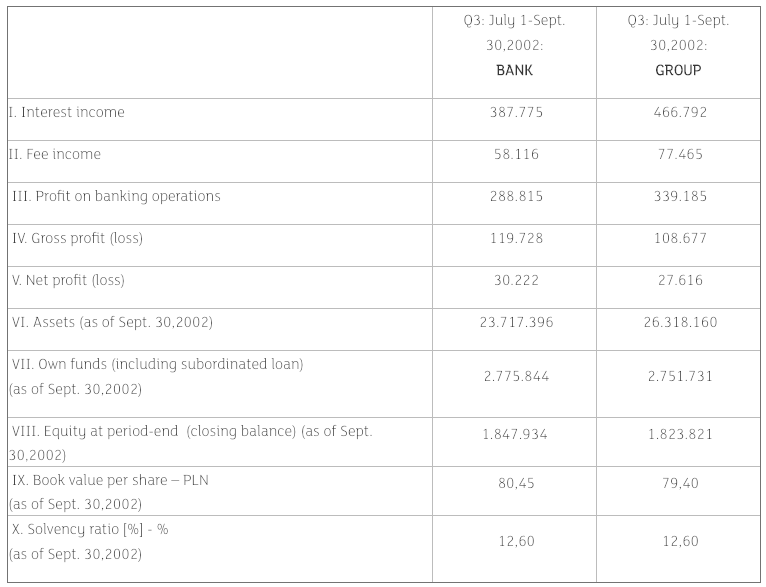 Following three quarters of 2002, the Bank’s earnings point to a significant gross profit growth in the context of the first half of this year, which has soared by 77.76% on a stand-alone basis and 74.76%. on a consolidated basis. A 50%-plus growth in interest and fee income is equally notable. In terms of equity (including subordinated debt), BRE Bank now ranks fourth among Polish listed banks (following PeKaO, BHW, BPH-PBK and ahead of ING BS).The BRE Bank Group’s earnings in core business in Q3’2002 provide a very good outlook for the future, as they are materially superior to those of the same period of the prior year: interest  earnings are up by 60%, fee income is up by 19%, and gross profit is 25% on the rise.This indicates that, after a period of recession and, consequently, a major dent in reserves, the Bank’s rebound to high levels of profit may be said to be more than viable.Q3 has been the time for the Bank’s continued operation in a difficult macroeconomic climate; yet, in many lines of the Bank’s and Group’s business, both have scored considerable successes to their name.mBank, the Group’s retail arm, has overshot yet another mark, this being the threshold of 300,000 customers in service. By last Nov. 9th, over 307,000 customers have deposited in excess of PLN 1.7b worth of deposits on 373,000 accounts. mBank’s recent dynamic expansion has proven that it may soon fail to fit the constricting ‘niche bank’ label: between Jan.-July 2002, has reached as many as 45% of the household deposit growth in Poland’s banking sector (source: NBP).Dynamic growth is also being experienced by MultiBank with its 19 outlets across the country and ready to roll out another 11. What is very important, MultiBank’s operation is gaining increased interest and confidence among customers who, within the “Financial Plan” facility, a novel solution to Poland, have been increasingly coming with loan applications since last May. Recently, MultiBank’s offering has also elicited expert acknowledgement. MultiBank’s Financial Plans have been awarded with the main prize under honorary auspices of the NBP Governor - the “Złota Donatywa Gdańska 2002” for best financial product in banking.BRE Bank may also be credited for good performance in money and capital markets. Its strong position in these markets is proven by high ratings in several high-profile ranking lists, i.a. one compiled by National Bank of Poland’s experts (ranked first after three quarters among money market dealer banks), Fitch Polska (second in terms of the value of mid-term securities issued and third in terms of short-term securities issued) and “Risk Magazine”, a directional publication that has awarded three special mentions to BRE Bank in a ranking by derivatives experts world-wide: twice in “PLN Forward Rate Agreements” and “PLN Short-Dated Swaps”, with another mention for “PLN Interest Rate Swaps ”. In these categories, BRE Bank is second only to leading foreign banks such as JP Morgan Chase or Bank of America.Operations by BRE Bank Group companies in Q3’2002 have continued to focus on organic growth, with many having considerable success. Dynamic growth is experienced by Skarbiec Asset Management Holding: Skarbiec TFI is the market’s fifth largest in terms of assets in management (a 15% asset value growth in Q3), BRE Asset Management has had a 31% year-to-date growth in the value of assets in management, with BRE Agent Transferowy leading the market in handling TFIs (investment fund companies). In addition, merger has been completed between PTE Skarbiec-Emerytura and PTE BIG BG which, with both OFEs (open-ended pension funds) merged, will cause Skarbiec to leap to market position no. 5 in terms of asset value and membership numbers. In corporate banking, BRE Bank has reached a 17 %-plus share (as of Q1’2002) in foreign trade finance, of which 19% on the exports side and 15% in imports. The share totals ca.US$ 7b and is rising. Rheinhyp-BRE Bank Hipoteczny has generated a 7% after-tax profit growth, with an impressive 22% loan portfolio growth rate (PLN 151m). A similar, positive performance is to be attributed to the Intermarket Bank with its 13% growth rate in receivables in factoring (PLN 53m). Recently, the Internarket group has undergone capital consolidation: BRE Bank has signed an agreement to buy a 50% stake in Magyar Factor. By the end of last September, BRE Leasing has made it to top companies that enable car leasing, and continued to lead the market for real estate and industrial plant and machinery lease.However, in terms of the Corporate Client, BRE Bank continued to feel the impact from a slower economic growth rate. In their preparations for expanding into SMEs, BRE Bank has plans to launch a new package offering towards year-end.In addition, as earlier announced, BRE Bank has embarked on a number of initiatives to optimise profit and reduce expenses to the largest possible degree, which would result in curbing or eliminating losses at the year’s end. Under this policy, the Bank pursues a series of strict and rigorous cost control measures. Despite considerable spending in IT (particularly, i.a. for the growth of its Retail Banking Business), operating expenses on consolidated basis have dropped by 3.5%. Also, in Q3, the Bank has reduced its equity market exposure and continues to restructure its investment portfolio. Likewise, a programme has been launched for group redundancies and pay grid restructuring due for completion in Q1’2003.The goal underlying the above measures is to ensure return to profit levels satisfactory for the shareholders in the years to come.Kontakt dla mediów