Commerzbank decided to increase the capital involvement in BRE Bank

The Commerzbank AG decision to increase the capital involvement in BRE Bank SA proves a very significant position and the trust given to BRE Bank by its main shareholder and strategic partner. It also proves the importance of the expansion in this part of Europe to the Frankfurt bank. BRE Bank is the biggest Commerzbank’s investment in Central and Eastern Europe, and the willingness to increase the capital involvement confirms the growing role of BRE Bank in the Commerzbank’s development plans in this region. Commerzbank is going to take advantage of the BRE Bank’s vast experience in CEE markets. The strategic partner appreciates BRE Bank’s close relations with our eastern neighbours, as well as the fact that it has built   around the Austrian Intermarket Bank AG the main European factoring group, with leading position of individual companies on Austrian, Hungarian, Czech, Slovak and Polish markets.Commerzbank’s plans to increase its capital involvement in BRE Bank acquire special meaning in view of the near prospect of Poland’s accession to the European Union. BRE Bank becomes thus internationally renowned, appreciated and trusted as a very close partner of a leading European financial institution, which undoubtedly is Commerzbank.The nearly nine-year co-operation between BRE Bank and Commerzbank is an example – rather exeptional on the Polish market – of a very close and at the same time unique co-operation and ownership supervision, based on a high level of Commerzbank’s trust towards the Warsaw headquarters of BRE Bank. BRE Bank retains big management autonomy, and Commerzbank’s involvement has a supplement and strategic character, which is quite unique, compared to market practice of other investors in Poland.Next example illustrating the close ties and BRE Bank’s importance in the general Commerzbank strategy was taking up on January 1, 2002 by Wojciech Kostrzewa, BRE Bank President of the Board, the function of the Commerzbank Regional Board Member, responsible for the whole Commerzbank’s banking operations in Central and Eastern Europe.BRE Bank is convinced that the Commission for Banking Supervision consent to increase the Commerzbank’s capital involvement will start a new stage of the banks’ co-operation, developing so smoothly for nearly a decade. BRE Bank Board’s priority for the nearest future is to prove the rightness of the strategic partner’s intention, and thus to secure the steady organic growth of the bank, resulting in the growth of its value for all the shareholders, as well as the return to the outstanding for the Polish banking sector profits.Stages of BRE Bank and Commerzbank co-operationIn December 1994, BRE Bank concluded a strategic partnership contract with Commerzbank AG. In 1995, Commerzbank took over 21% of BRE Bank share capital. In 1996 the Commerzbank AG share in BRE Bank capital grew up to 33%, and in 1997 – to 48,7%.Since October 2000, Commerzbank’s share capital involvement has amounted to 50.00%. Since then Commerzbank has consolidated BRE Bank’s financial reports, and moreover it granted BRE Bank a letter of comfort.From 1995 to mid-2003 the BRE Bank’s share in the Polish market has grown from 1.8% to 6.25% and shows further upward tendency. 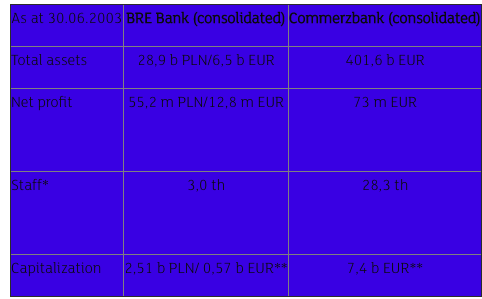 Commerzbank AG was founded in Hamburg, on 26 February 1870, as Commerz- und Disconto-Bank, predominantly by Hanseatic merchants, merchant bankers and private bankers. In 1873 a subsidiary was established, the London and Hanseatic Bank. This continued to operate until the outbreak of the First World War. In 1897, outlets were established in Frankfurt am Main and Berlin. After taking over Berliner Bank in 1905, Commerz- und Disconto-Bank made the capital city rather than Hamburg the focal point of its activities. Within a few years, it had become one of the leading German banks.In early 1940, the bank assumed the name of Commerzbank Aktiengesellschaft, by which it was already generally known. In West Germany, the Allied Forces ordered the big banks to be broken down into smaller units in 1947/48. In 1958, the various units which had previously constituted Commerzbank reunited to form one unit. The German economic revival, the so-called economic miracle, resulted in strong growth in the banking sector, too.In the fifties, Commerzbank opened a number of representative offices abroad, followed in the sixties and subsequent decades by various subsidiaries and branches. The New York branch, set up in 1971, was the first to be established by a German bank in the US.As a so-called universal bank, Commerzbank covers retail banking, corporate banking and investment banking. It also offers specialised services via a number of subsidiaries, such as leasing, fund management, real-estate and equity investment. Among its leading subsidiaries is comdirect - one of Europe´s leading on-line brokers. Commerzbank´s main areas of activity are Germany and the rest of Europe, as well as North America. Folowing the EU enlargement process as well as the integration with Central and Eastern Europe, Commerzbank extends its presence in this region.