In Q2 2004 BRE Bank continued with dynamic growth and fast improvement of key financial indicators. Its H1 2004 net profit grew to nearly PLN 71 million, the Bank’s best profit figure in 3 years and a proof of stable upward trends already visible in Q1 2004. The Group’s total assets grew by almost PLN 4 billion year on year; they increased by approximately PLN 1.5 billion in Q2 2004 alone. This makes the Bank a market leader in terms of growth. Thanks to the Bank’s successful stock issue, its solvency ratio grew significantly and is 14.3% on a non-consolidated basis. Strong financial performance of mBank and MultiBank continued in Q2 2004.

The performance of Q2 2004 was in line with Management expectations. A strong improvement (year on year) was due to continued restructuring measures started in late 2002 and a stable growth of the Polish economy. Most importantly, many items of the Bank’s income statement showed fundamental improvement and stronger growth than owed to GDP growth alone. Particularly impressive is the performance of the core business (H1 2004 compared to H1 2003), including the growth in net interest income (up 41%), net commission income (up 21%), result on banking operations (up 20%), and the net profit (up 27%). The positive trend continued quarter by quarter in Q1 and Q2 2004. It is a proof of the Bank’s robust potential to use the opportunities offered by economic upturn. The structure of BRE Bank’s results suggests that the upward trend is very likely to continue later this year.Selected Financial Indicators, Q1/Q2 2003/2004 [PLN’000] 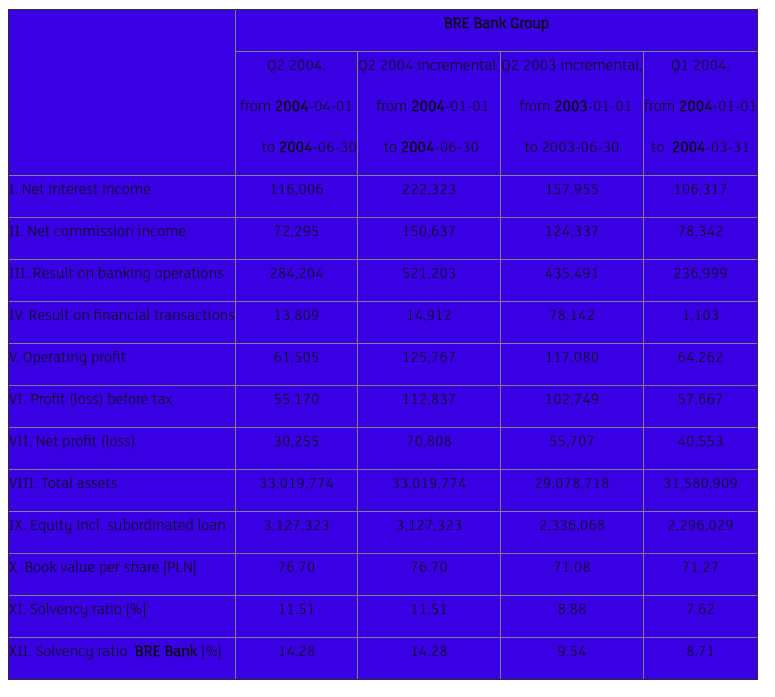