The net profit of the BRE Bank Group was PLN 107.5 million at 30 September 2004. The total assets of the Group grew PLN 2.9 billion year on year. The solvency ratio of BRE Bank increased considerably to 12.94%. In Q3 2004, mBank reported gross profit and MultiBank generated a positive EBITDA.
Particularly noteworthy of recent performance are the results of the core business which recorded a double-digit rate of growth: the net profit was up 43%, the net interest income was up 71%, the net commission income was up 19%, the result on banking operations was up 31%, the operating profit was up 60%, and the gross profit was up 74%. BRE Bank has continued with this positive trend, also compared to the equally profitable previous quarter of the year. 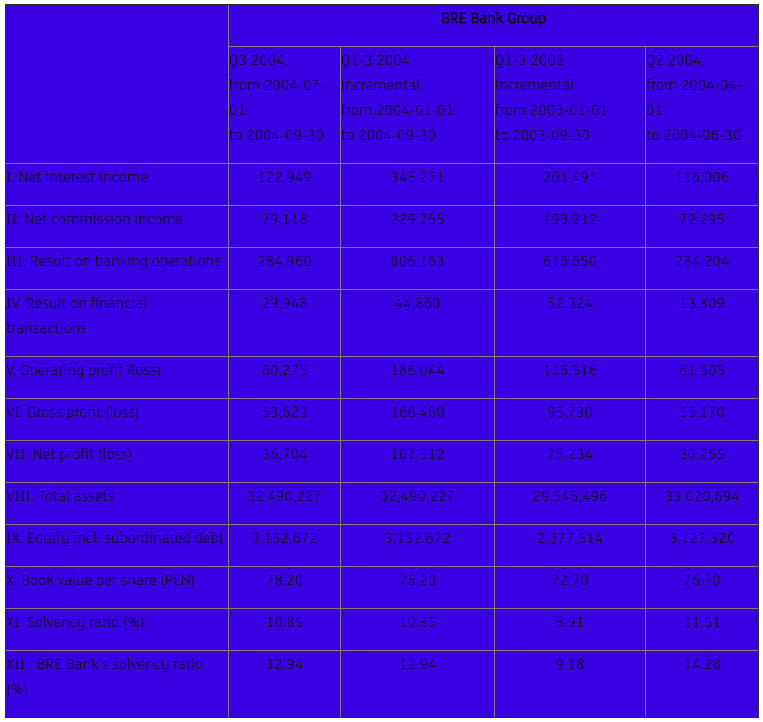 mBank reported a gross profit and MultiBank a positive EBIDTA for a third successive quarter. However, in line with earlier expectations, break-even is still ahead of the retail banking business.
mBank now has over 715 thousand clients (up 31% compared to 31 December 2003), operates 878 thousand accounts, and boasts a deposit base of PLN 2.65 billion. Continued expansion of mBank suggests that the franchise will have 750 thousand clients and ca. 940 thousand accounts by the year-end.
MultiBank has increased by 50% the number of its customers in 2004. It now serves over 173 thousand clients who have deposited PLN 610 million. MultiBank’s loan portfolio crossed the mark of PLN 1.6 billion, including PLN 1.3 billion of mortgage Financial Plans. MultiBank continues to expand its branch network, currently numbering 44 proprietary and partner outlets.

Foreign trade transactions handled by the Bank grew 15% at the end of Q3 2004 and reached USD 15.9 billion. Over 1 thousand new clients use BRE Bank’s new Effect and Effect Plus SME Packages. Rather than microenterprises, these clients are small and medium-sized enterprises which carry full books of accounts and represent a solid source of the Bank’s present and future earnings. As of early November 2004 BRE Bank offers its corporate clients the latest, most state-of-the-art, fully functional internet banking system named iBRE.

The total loan portfolio of the BRE Bank Group grew 12% year on year at 30 September 2004. Thanks to a rigorous approach to credit risk, the share of BRE Bank’s irregular loans dropped to 13.3% of the portfolio, down 1.5 percentage points compared to 30 June 2004. It is worth mentioning that “default” portfolio (according to Basel II regulations – receivables overdue more than 90 days + lost loans according to NBP classification) has been also reduced substantially, down to 3.4% (comparing to 4.3% as at Q3 03). Deposits with BRE Bank grew 21% year on year and reached almost PLN 13 billion.

Three quarters into the year, BRE Bank is a leader in debt securities, ranking second in terms of clients’ short-term debt and second among arrangers of debt with maturity over one year issued by corporates and banks. In mid-September, the Bank sold 45% of Billbird stocks from its portfolio, earning PLN 5.9 million on the investment.

BRE Bank Group subsidiaries continued to expand in Q3 2004.BRE Leasing remains the second largest market player with a portfolio of leasing contracts amounting to PLN 934.7 million, up 51% year on year. The company expects its leasing portfolio to reach the all-time high of PLN 1.2 billion by the year-end. Three quarters into the year, the company’s net profit was PLN 7.1 million, more than three-fold growth year on year (PLN 2.2 million in Q1–3 2003).

The SKARBIEC Asset Management Holding manages assets worth PLN 4.2 billion. Its subsidiary PTE Skarbiec-Emerytura generated a gross profit of PLN 3.1 million and grew its net assets by 22% year on year. Skarbiec TFI managed PLN 1.8 billion of assets at 30 September 2004. Its 3 investment funds are the market leaders as measured by the three-year growth rate.

Dom Inwestycyjny BRE Banku (BRE Bank Securities) generated a net profit of PLN 5.0 million, more than double the profit of all of 2003. It is the market leader in option trading on the Warsaw Stock Exchange (a share of 40%) and the second largest trader of forwards and futures (12%).

The three quarters of the year confirm that BRE Bank’s profitability in 2004 is stable. Coupled with a positive outlook of the Bank’s retail banking business and growing profits of the Group subsidiaries, the Bank’s future looks most optimistic.
“The fact that the profitability of mBank and MultiBank has significantly improved for a third consecutive quarter confirms our projection than next year will bring a real breakthrough. Looking at financial results of BRE Bank’s business lines, the performance will be boosted once the stage of planned losses caused by the retail banking investment is over. And what is more, we are expecting mBank and MultiBank to contribute considerable earnings very soon,” said Wojciech Kostrzewa, the CEO of BRE Bank.

According to Janusz Jankowiak, BRE Bank’s Chief Economist, the Polish GDP will grow at a relatively high rate of 5% in the coming 15 months. Stable economic growth and the enhanced solvency ratio of the Bank will boost the Bank’s relations with clients, especially corporate accounts.Kontakt dla mediów