The financial results of the BRE Bank Group

The 2003 YE results of the BRE Bank Group proved the thesis of not repeating the one-off weak performance of 2002. As expected, BRE Bank closed 2003 at a significant consolidated pre-tax profit close to PLN 59.5 million, a clear improvement after last year’s Group loss of PLN 413.5 million. The total assets of the Group grew by over PLN 3 billion (compared to 2002); and crossed the mark of PLN 30.5 billion. According to estimates, the Bank has remained the fourth largest listed bank.

An overview of the results of Q4 2003 clearly suggests that two very important factors had an adverse effect on the net profits, causing their reduction compared to the end of Q3 2003. The net profit generated in 2003 was mainly reduced significantly due to the revaluation of deferred income tax assets and liabilities following the reduction of the income tax rate to 19%. As a result, the net profit fell by over PLN 31 million at the year-end. The other crucial factor causing the weaker net profitability was the debt market decline which affected the financial results of H2 2003, especially in the last quarter of the year. 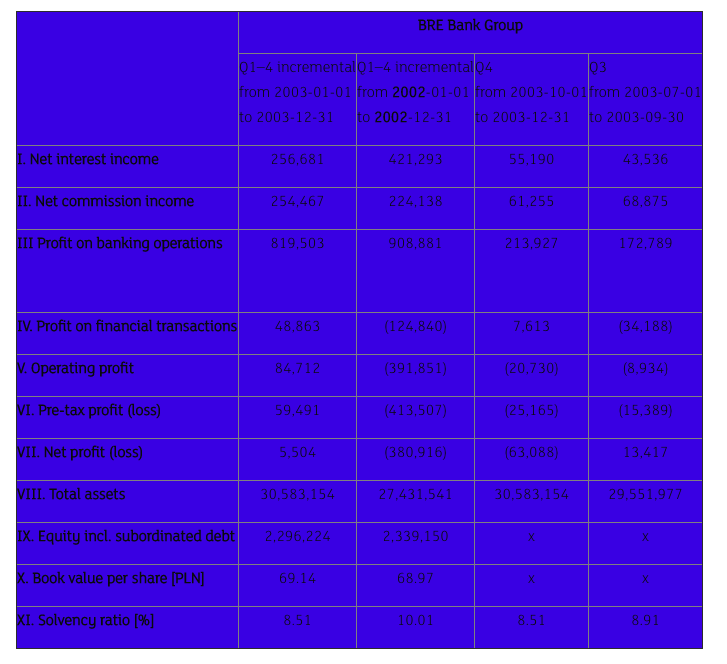 The net profit of BRE Bank in 2003 was adversely affected by those coinciding unfavourable external factors, as demonstrated by the performance of the Bank’s core business which clearly improved and grew compared to 2002. Earnings of 2003 were stronger in such areas as net commission income, profit on financial transactions, operating profit, profit on banking operations, and both pre-tax and net profits.

It must be borne in mind that the success of the restructuring measures undertaken by BRE Bank was achieved not only in the context of very high investment in retail banking but also at a time of weak macroeconomic conditions in the Polish economy. Hence, the return to the growth path and profitable performance of 2003 support optimistic expectations for 2004.

By successfully managing its investment portfolio in 2003, the Bank proved that it can effectively restructure its investments and sell stocks at a profit (ITI Holding, Elektrim, Optimus).

Investment banking in its broad sense was one of the leading business lines of BRE Bank in 2003. Although BRE Bank was hurt by the downturn in the debt market, yet the results of its investment banking business remained an important part of the Bank’s revenue as the business contributed over PLN 101 million in net profit in 2003. However, in view of the performance record of the investment banking business, this result is certainly below the Bank’s real potential. The latter is strong mainly due to BRE Bank’s robust market position: in 2003, the Bank for the third consecutive time came as number one in the NBP ranking of the best money market dealers.

In 2003, BRE Bank enhanced its co-operation with corporate clients, especially small and medium-sized enterprises (SME). The broad offering was extended to products of BRE Bank Group subsidiaries. As a result, BRE Bank was a leader in the latest edition of the competition of Entrepreneurship-Friendly Banks. The Bank’s share in foreign trade finance also grew considerably and was at a high US$ 19.8 billion at the year-end, equivalent to a market share of 18.6%. As the economy picked up, BRE Bank enjoyed clear growth in corporate banking transactions in late 2003, yet another positive prospect for the future.

In 2003, BRE Bank’s retail banking business continued to expand fast. Both of its retail banking businesses achieved an impressive growth rate of the number of customers and the volume of deposits as well as credit products sold. Those achievements were particularly noteworthy in the context of a 2% drop in household deposits in 2003; at the same time, the total volume of deposits at mBank and MultiBank grew 53% in 2003 to nearly PLN 3 billion at 31 December 2003, contributing as much as 25% of BRE Bank’s liabilities to clients. Retail client loans grew by a factor of 7.5 in 2003 and stood at PLN 1.1 billion at 31 December 2003 (11.4% of receivables from clients).

However, in 2003 the retail banking business continued to generate very high losses due to continuing investments.

The year 2003 was very good for the BRE Bank Group subsidiaries. In particular, the subsidiaries of the Skarbiec Asset Management Holding were growing successfully. The assets of the Holding subsidiaries grew by over 37% and stood at PLN 4.53 billion at 31 December 2003 (compared to PLN 3.3 billion at 31 December 2002). The three largest companies of the Holding reported significant net profits in 2003: TFI Skarbiec earned PLN 6.9 million (compared to PLN 1.3 million in 2002); PTE Skarbiec-Emerytura, PLN 17.8 million (a loss of PLN 29.6 million in 2002); Skarbiec Investment Management, PLN 2.18 million (a loss of PLN 1.39 million in 2002).

Rheinhyp-BRE Bank Hipoteczny and BRE Leasing also reported profits. In 2003, Rheinhyp-BRE reinforced its position as the leader in mortgage bond issues (with a market share of 91%). The total value of the bank’s loan portfolio was PLN 1,517.84 million and its net profit PLN 3.44 million at 31 December 2003. In view of the potential of the mortgage market, BRE Bank is negotiating the acquisition of the remaining 50% of stocks of Rheinhyp-BRE. BRE Leasing recorded the best year in its history in terms of leasing of movables. The company’s market success is measured against 2002 by a 40% growth in the value of leasing contracts and a 130% growth in the number of contracts. Due to the fast growth in leases of vehicles, BRE Leasing became a market leader with a market share of approximately 9% and a third position in the sector. Thanks to the growing volume of transactions, BRE Leasing remained a major player in the Polish leasing market with a share of approximately 8%. Its net profit was ca. PLN 3 million in 2003.

The Intermarket Bank Group was also growing successfully in 2003. It remained the leading factoring group in Central Europe and grew its turnover by 30% (EUR 2.8 billion at 31 December 2003) and its net profit by over 50% (ca. EUR 5 million). The Group’s average share in the Central European market was over 26%.

The strength of the BRE Bank Group is also confirmed by the fact that three subsidiaries are now rated by the renowned rating agency Moody’s.

In summary of 2003, it must be said that the success of the Bank’s restructuring measures proves that the 2002 loss was a one-off event. While undertaking complex and staged growth efforts, the Bank kept its promise and restored profitability. The measures undertaken include a policy of strict cost-cutting. Best proof: in 2003, while expanding the MultiBank branch network and implementing other investments, the Bank’s operating costs fell by 1.5% p.a. and its payroll costs fell by 8.3%. Yet, despite this radical improvement, the Management of BRE Bank realises that the results of 2003 are still much below the mid-term expectations of the shareholders and below the Bank’s capacity of generating return on equity. Therefore, measures aimed to restore the Bank’s high profitability will continue in 2004. Importantly, these efforts have clear and realistic prospects of success in the nearest future. Positive results of the business lines, in particular the Group subsidiaries, and the projected and approaching profitability of the retail banking business (mBank to generate positive EBITDA in Q1 2004!) are the main aspects of the optimistic outlook of BRE Bank.

BRE Bank plans further market expansion in the nearest future and the planned acquisition of 50% of stocks of Rheinhyp-BRE Bank Hipoteczny from Eurohypo will be a milestone in continued growth in 2004.

In view of the projected GDP growth of approximately 5%, as forecast by Janusz Jankowiak, BRE Bank’s Chief Economic Analyst, the corporate banking business is likely to improve as the Bank’s clients will move out of the most difficult period of market cycles in the Polish economy.

Expansion and market growth plans will be supported by new share issue (around PLN 500 m). The final decision in this matter has to be taken by the nearest Annual Shareholder’s Meeting.

BRE Bank enters 2004 helped by closer co-operation with its strategic partner, Commerzbank AG, who was allowed by the Banking Supervision Commission on 11 September 2003 to increase its investment in BRE Bank to 75% of stocks and held 72.16% of the equity and votes in BRE Bank at 31 December 2003 . The increased investment of Commerzbank in BRE Bank’s equity opens up new prospects of growth and provides synergies due to closer co-operation. The decision also confirmed the importance and the strong position of BRE Bank in the strategy of Commerzbank which sees BRE Bank and the Polish market as its second home market.

In anticipation of closer co-operation with both Commerzbank and the other investors, BRE Bank committed itself in 2003 to comply with the principles of Good Practices in Public Companies. The adoption of the code of business ethics is a consequence of the Bank’s long-time policy of transparent business operation.